In 2020, the historical Arena Festival reaches its 98th edition and expands its rich program with 53 evenings, 5 opera productions and no less than 5 special events, and inaugurates with a completely new show that combines the famous Cavalleria rusticana and Pagliacci. Tickets are already on sale, with several new features also regarding the seating at the huge amphitheatre under the stars.

The 2020 Festival inaugurates on 13th June 2020 with a new production of the famous passionate double verismo bill: Cavalleria Rusticana by Pietro Mascagni and Pagliacci by Ruggero Leoncavallo, immortal stories of love and jealousy with the backdrop of Italy at its most real and visceral. The two operas, which have not been performed on the Arena stage since 2006, will be staged for 9 evenings with a new production.
Further performances: 19, 26 June – 9:00 pm
3, 8, 17 July – 9:00 pm
8, 13, 22 August – 8:45 pm

From 27 June, for 7 appointments, an extraordinary China “in the days of fables” returns, with Puccini’s Turandot, which also features magnificent direction and scenery by Franco Zeffirelli and sumptuous costumes by Academy Award winner Oscar Emi Wada, which clothe the protagonists and a huge, lively and participant crowd in Puccini’s absolute masterpiece.
Further performances: 11, 16, 31 July – 9:00 pm
14, 26 August – 8:45 pm
3 September – 8:45 pm

The fourth opera, scheduled for 9 performances from 4th July, is Verdi’s Nabucco with the elegant production that inaugurated the 2017 Festival, with direction and costume design by Arnaud Bernard and set design by Alessandro Camera. The story takes place told in the Italian Risorgimento, the period in which Verdi lived and wrote his first real success, with a choral, cinematographic and extensive fresco.
Further performances: 9, 15, 25 July – 9:00 pm
6, 11, 19, 28 August – 8:45 pm
4 September – 8:45 pm

Lastly, from 1st August for 6 evenings, Verdi’s La Traviata is being proposed in the marvellous inaugural production of the 2019 Festival, also created by Franco Zeffirelli, his ultimate masterpiece after sixty years’ study of the world’s most loved and performed opera with the top singers of the 1900s. The late maestro was responsible for direction and set design, with costumes by Maurizio Millenotti.
Further performances: 7, 15, 21, 27 August – 8:45 pm
2 September – 8:45 pm

The program of the 2020 Festival will be enriched as never before by five special evenings with top international artists.
On 28th June there will be the first of the extraordinary shows scheduled, the Gala Event, an unmissable event with internationally famous artists.
On 7th July spectators will take part in an unforgettable evening in which Plácido Domingo will be the star: in fact, the Domingo Opera Night will be a unique opportunity to run through the artist’s stellar career after 50 years from his Arena debut, by means of the performances that made him world-famous, along with other exceptional soloists, with various operas in complete scenic format.
Following the great success of the double evening in 2019, staged for the first time in the ancient Verona amphitheatre, on 20th and 21 July Fondazione Arena is re-proposing Roberto Bolle and Friends, the appointment with great dance that has enriched the calendar of the Festival with world ballet stars since 2014, in a co-production with ARTEDANZA srl.
Then on 23rd July at 9:15 pm the Arena di Verona will host the world’s most sought-after opera stars, incredibly together for the unique evening The Stars of Opera.
Lastly, on 23rd August, the solemn notes of Beethoven’s 9th Symphony will echo round the stones of the amphitheatre. This titanic masterpiece’s value still transcends music history to this day, becoming a message of universal brotherhood, 250 years after the birth of the most famous of composers.
Exceptionally conducting will be maestro Ezio Bosso, who personally announced his return from the Arena stage after the triumphant sold-out with the Carmina Burana. 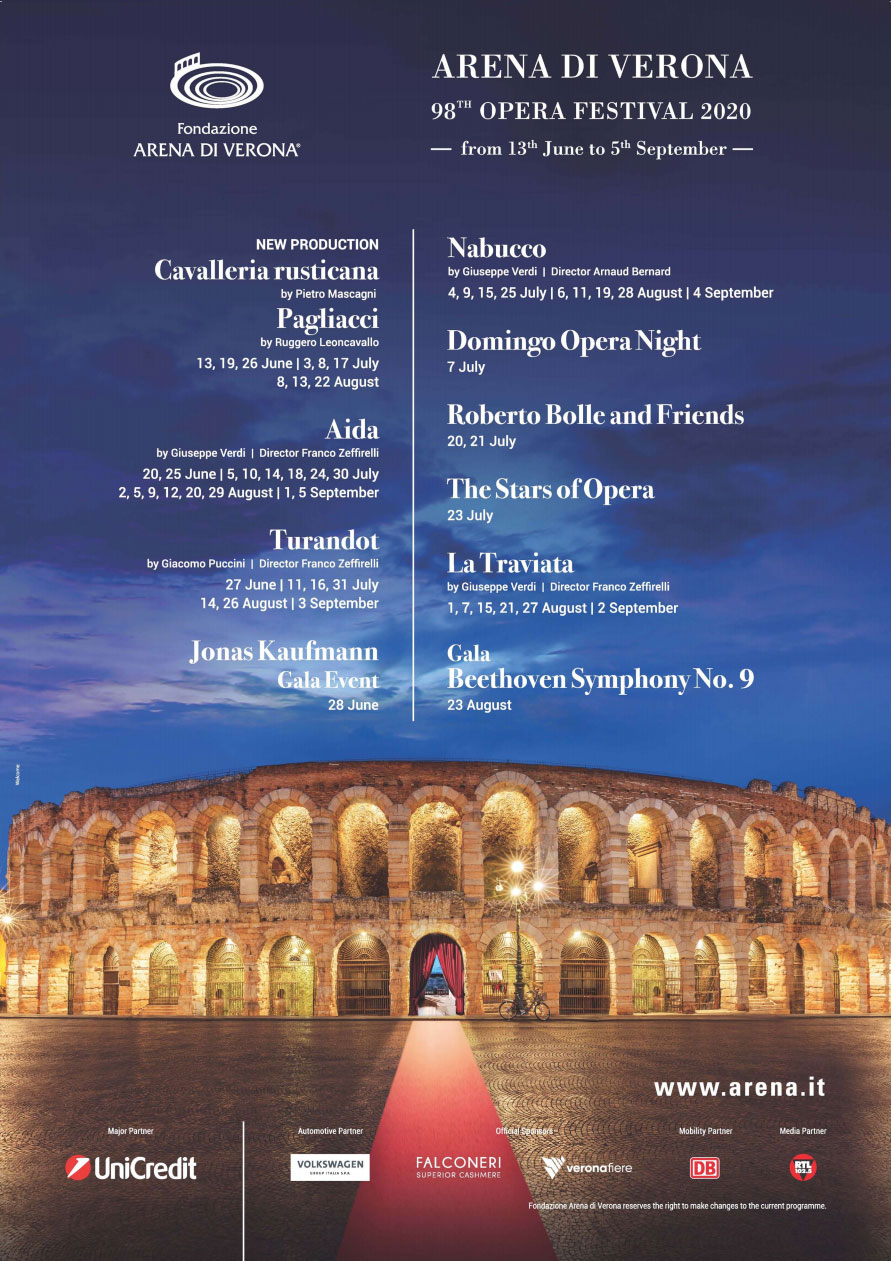 The tickets for the 2020 Arena di Verona Opera Festival shows, from € 21.50 to € 300.00, are already on sale for some sectors at special prices until 24th December 2019. These include the brand-new prestigious stall seats and the 4th and 5th sectors, which ensure an exceptional view of the stage.
All that’s necessary is to visit the Web site www.arena.it and follow the social media channels (Facebook, Twitter, Instagram and YouTube) to reserve a seat and live the magic experience of Opera under the stars for the summer of 2020 too.