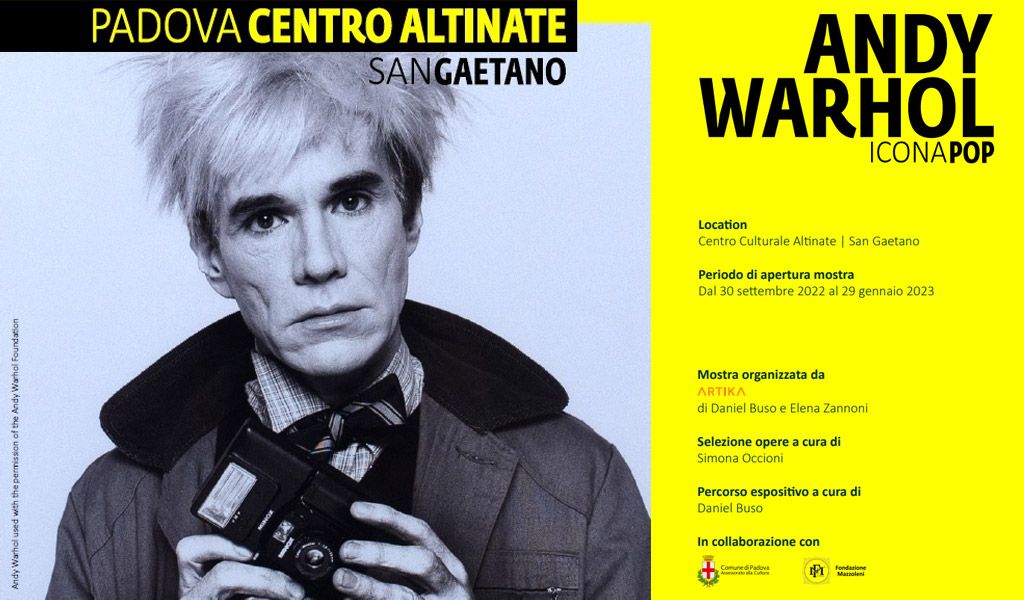 Artika, in collaboration with the Department of Culture of the Municipality of Padua and the Mazzoleni Foundation, is organising the exhibition Andy Warhol Icona pop

The exhibition is divided into 6 thematic sections, starting with a biographical portrait of the great New York artist. 150 works including drawings, engravings, silkscreens, sculptures and postcards. A fast-paced journey into the eccentric world of Warhol, the pop icon par excellence.
The corpus of works includes the brands that populated the advertising imagery popular in the United States in the 1960s and 1970s, such as the famous Campbell’s soup, and the faces of show business icons, from Mick Jagger to Sylvester Stallone, to the legendary Marilyn.

Andy Warhol created his works following a precise pattern: visual isolation of the image, assimilation of advertising language, repetition and use of loud colours.
The process revealed the true nature of modernity: indifference, materialism, media manipulation, economic exploitation, unbridled consumerism, stardom and the creation of false needs and false aspirations in the masses.
The simplicity of Warhol’s images still guarantees their immediate usability today.

The iteration irrefutably recalls the repetitiveness of images employed by mass culture to sell goods and services. The assimilation to industrial marketing does not end with the repetition of the characteristics of advertising, but becomes even more profound since Warhol used the techniques of industrial production itself.
techniques of industrial production itself. The operation anonymised the figure of the artist in the production process, thus emphasising the absurdity of complete detachment from any emotional commitment.

The absolute icon is Marilyn, painted just after her suicide on 4 August 1962. Warhol’s work thus becomes a portrait of a saint against a background of gold leaf like a religious icon. Saint Marilyn, whose beauty and superficial cheerfulness was but a mask, because in reality unhappiness also belongs to the world of celebrities.

The first work with this subject was exhibited at Warhol’s first New York exhibition in the same year. The photograph used for all paintings and prints of the actress was taken in 1953 by Gene Kornman for the advertisement of the film Niagara.